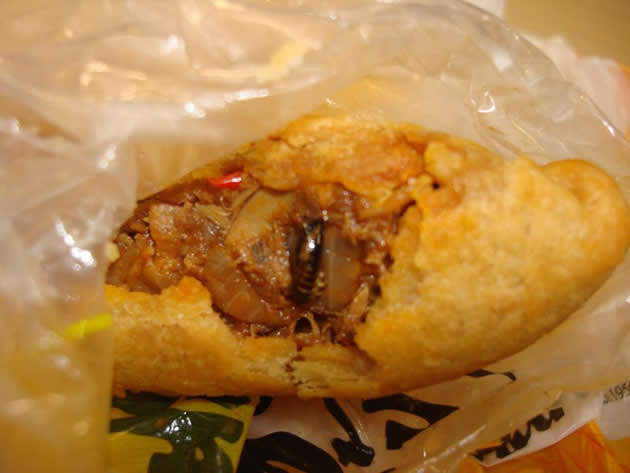 A customer had a shocking discover when she bit into her sardine puff bought from one of the favourite snack chains in Singapore. Read the news below.

Ikari can help food service establishments, food factories and restaurants to avoid such terrible incidence from happening. It is devastating to the customer, and the brand name will be badly tarnished for a very long time.

Beleaguered Old Chang Kee on Tuesday said they apologised twice to the customer who said she found an unidentified insect in one of the snack chain’s signature sardine puffs.

“We have apologised to the customer on two different occasions for her unpleasant experience,” Old Chang Kee said in a post on its Facebook page, adding that the company had just completed independent annual checks for HACCP certification in its food safety management system.

“Food hygiene and customer service remain our overriding priorities,” the company said. “We will continue to do our utmost best to strengthen our processes in both areas.”

In response to the company’s statement, 25-year-old Maggie Jana said that its public relations executive only apologised after she had asked her to do so.

“Their entire emphasis was on how many legs the insect had, and it was only after I explicitly told them to apologise that they did,” she told Yahoo! Singapore Tuesday evening.

After taking her first bite into a sardine puff she purchased from an outlet at the Singapore Post Centre last Wednesday, 32-year-old Sandra Jana, Maggie’s sister, discovered the insect (pictured above) in the filling. The incident caused an online furore last week after it was reported.

Maggie, who works with Sandra as a customer support representative at Delta Airlines, said her sister’s horrific find shocked all of their colleagues in the office.

“Many of us are Old Chang Kee lovers too, and had themselves bought food from there that morning, but when they found out about this, everyone promptly threw away what they had bought that day,” she added, saying that no one has purchased anything from the snack chain since.

On the advice of her colleagues, Sandra then returned to the Old Chang Kee shop in the afternoon to complain about her shocking find.

“The staff there were pretty rude, though, and one of them raised her voice against her (Sandra),” said Maggie. “One of the cooks even emerged from the back and said, ‘If you want a new curry puff, just take it and go,'” she added.

She said that according to Sandra, who revisited the shop on her own, staff there were not apologetic, even making observations that the insect appeared to be alive, possibly insinuating that she may have deliberately placed it inside the pastry filling on her own.

They did ask her for her contact number, however, and kept the offending pastry so they could run tests on the yet-unidentified insect, Maggie said.

She recounted that her sister received a call from a manager at the food chain on Thursday, where she was informed that the creature in question “was most likely not a cockroach because it was eight-legged, not six”. The manager also said this was determined after the insect was sent to a laboratory for identification, but it may take several days before it determines what exactly it is.

“They were totally missing the point,” exclaimed Maggie, who on Thursday also decided to post the picture above on her Facebook page, to share her experience with fellow Old Chang Kee lovers. The public picture went viral, with almost 100 comments and 150 people sharing it by Saturday morning.

Another user, Cassandra Teo, linked to Maggie’s photo on the Old Chang Kee Singapore Facebook page — and the administrators there responded on Friday afternoon to say they will be “investigating the matter more fully”.

As Sandra was too disturbed and frustrated by the entire situation to want to speak to the authorities, Maggie said she took over dealings with the Old Chang Kee management, filing a complaint with the National Environment Agency (NEA) as well.

Yahoo! Singapore understands that the NEA has acknowledged receipt of the complaint, and will be sending officers to its premises once it commences investigations into the incident.

In the meantime, things have not been the same for Sandra, says Maggie.

“She can no longer eat meals without picking through every spoonful to check it carefully before putting it into her mouth,” she said.

Ensure that such an incident does not occur with Ikari. Call us for comprehensive pest control service at +(65) 6743 1313.