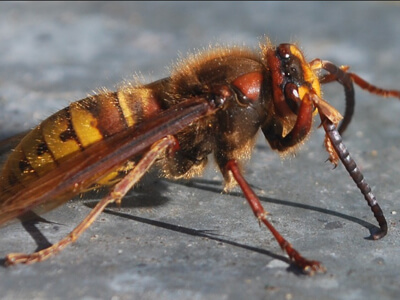 Bees, hornets, and wasps are not as harmless as they look.

Bees, hornets, and wasps are not as harmless as they look. Bee stings contain a lot of poison, which quickly causes swelling and allergic reactions. Further, bee sting has hooks and gets stuck into the skin and keeps pumping poison into the wound for several minutes even after the attack! A bee is capable to kill a child in about 50 stings. A hornet sting is even more painful and venomous than a bee’s as it can kill a human being in just three stings. Wasps, bees, and hornets’ stings contain venom and call for immediate medical help especially if they sting in sensitive areas like tongue, neck where there is a risk of suffocation.

A wasp sting is usually harmless, but 30 to 40 stings are dangerous and could kill you. Although the complications of wasp stings are rare, a severe reaction may cause blood clotting too. Some people may have a severe allergic reaction to wasp sting known as Anaphylaxis which is fatal and calls for a medical emergency! It is an imperative to call emergency under signs like wheezing, swollen face, nausea or vomiting, fast heart rate, dizziness, difficulty swallowing, loss of consciousness, and drop in blood pressure as death can result in as little as 10 minutes!

Although it is quite tempting to remove these nests immediately, this should be done safely and effectively. So, a licensed pest professional is the only best solution to seek help from. They have the experience and right kind of tools to deal with a large number of aggressive wasps, hornets, and bees in order to prevent injury.

Our professionals have years of experience required to safely and carefully eliminate bees, hornets, and wasps from your property. They inspect the nests and decide when to come back for safer nest removal. If the nest is not too large, it may be removed with commercial spray. Ground nesting wasps live in burrows and they can be controlled by the application of insecticide dust inside the burrow. Our effective strategy involves treating the nest at night when all workers and queen insects are home and are far less aggressive. This technique has proven to be the most effective in killing most of the insects. Then the wasp nests are removed and the attached areas are treated as well so that the wasps and hornets returning to nests contact the residual and die. Our professionals make sure that once the hornets’ nest is destroyed, other wasps and hornets do not build it again. So it is best to choose our year-round program, as we will come back to your property on a required basis, for further inspection, at no extra cost, in case a new colony develops!

Tell your pest problems today to receive a FREE quote!